Minister of Justice of Senegal, H.E. Mr. Sidiki Kaba, endorsed for the position of President of the Assembly, meets with States Parties in New York 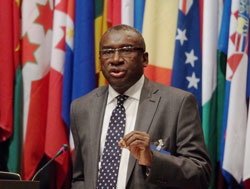 On 1 October 2014, H.E. Mr. Sidiki Kaba, Minister of Justice of Senegal, endorsed for the position of President of the Assembly of States Parties for the next trienium, met with States Parties gathered in New York.

Minister Kaba presented States Parties the vision for his presidency and declared the priviledge he feels to serve as President of the Assembly and to work with States Parties so that, “justice can contribute through its work in the prevention, deterrence, punishment, repair, and restoration of the dignity of the victim, and in releasing people from collective guilt.”

Minister Kaba’s work plan will focus on four thematic axes: the relations between Africa and the ICC, cooperation with the Court, complementarity, and universality of the Rome Statute. In addressing the practical arrangements of his term in office, he reiterated his full availability to discharge his functions and confirmed the support he would receive from the Ministry of Foreign Affairs of Senegal.

Minister Kaba’s mandate would run from the thirteenth to the sixteenth sessions of the Assembly, and would start on 8 December 2014. He would succeed Amb. Tiina Intelmann who has held this position since December 2011.

Mr. Sidiki Kaba was appointed Minister of Justice of Senegal in 2013. He is a lawyer who has dedicated his professional career to the promotion and protection of human rights, particularly on issues related to freedom of press, women’s and political rights. He participated in the 1998 negotiations of the Rome Statute and thereafter he implemented numerous campaigns to promote the ratification of the Statute by Senegal and many other African countries. In 2001, he became the first African to be elected President of the International Federation of Human Rights’, organization that he had previously represented to the African Commission on Human and People’s Rights. He is founder of numerous legal and advocacy organizations.

Minister Kaba has practiced law extensively, serving as a defense lawyer in high profile cases in Senegal, and several other African countries. A member of the Senegalese Bar, he has lectured at the Ake Loba College of Abidjan, Cote d’Ivoire, the Human Rights and Peace Institute of the University of Dakar, Senegal and at Evry Val d’Esson University, France.

Among other honors, Minister Kaba has been granted the titles of Chevalier of the National Order of the Lion of Senegal (2001), Officer of the Legion of Honor of France (2002), and Chevalier of the National Order of Mali (2011). He is Laureate of the Prize for the Promotion of the Culture of Democracy in Africa (awarded by the Pan African Observatory of Democracy in Togo, in 2003), and is an Honorary Citizen of Quito, Ecuador (2004),

Minister Kaba holds degrees in Law, Philosophy, French language, and a Masters in Business Law. He has published several books, including on international criminal justice and human rights in Senegal and Africa.

Senegal ratified the Rome Statute on 2 February 1999, becoming the first State Party. In 2007, Senegal adopted amendments to the criminal code and the code of criminal procedure to incorporate into domestic legislation the crimes defined by the Rome Statute and provisions on cooperation with the Court. Senegal ratified the Agreement on the Privileges and Immunities of the Court on 25 September 2014.

See also: Statement of Minister Kaba at the meeting with the Bureau of the Assembly, 30 September 2014