President of the Assembly meets with members of the European Parliament 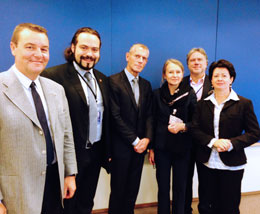 President Intelmann briefed the parliamentarians on the ongoing work of the Assembly. She drew attention to the 2014 report of the Advisory Committee on Nominations on the candidatures for the six judicial posts up for election at the next session of the Assembly. She informed on the efforts to improve State cooperation with the Court, and also highlighted the upcoming negotiations on the budget of the Court.

President Intelmann appealed to the engagement of parliamentarians so that the European Union continues to support politically and financially the core activities of the Court, as well as the universality of the Rome Statute, its full implementation at the domestic level, and the fight against impunity.

During her intervention, President Intelmann also recognized the engagement of Ms. Barbara Lochbihler, MEP, and Mr. Helmut Scholz, MEP, and of numerous other parliamentarians for their consistent and vocal support for the Court and the Assembly. "Thanks to your leadership, the European Parliament has been a pioneer in the fight against impunity. The Parliament has continuously pushed the European institutions to do more, thereby guaranteeing fundamental support to the effectiveness of the Court," stated President Intelmann.

President Intelmann thanked the European Parliamentarians for the support she received during her tenure, which will end on 8 December. She expressed confidence that such support would continue to be extended to the next President, H.E. Mr. Sidiki Kaba, Minister of Justice of Senegal.