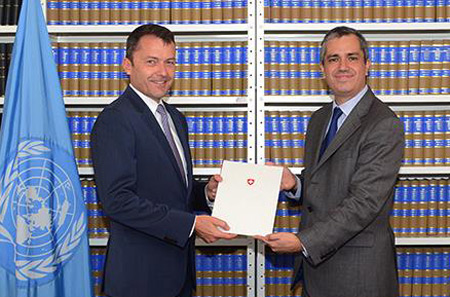 The President of the Assembly of States Parties to the Rome Statute of the International Criminal Court, H.E. Mr Sidiki Kaba, welcomes the deposit by Switzerland on 10 September 2015 of the instruments of ratification of the amendments to the Statute on war crimes and the crime of aggression.

The said instruments were presented by H.E. Mr. Jürg Lauber, Permanent Representative of Switzerland to the United Nations.

Switzerland thus becomes the twenty-fifth State to have ratified the amendments on war crimes and the twenty-four for those on the crime of aggression.

"I congratulate Switzerland for these ratifications, which, concerning the crime of aggression, are an important step towards the attainment of the objective of activating the jurisdiction of the Court in 2017", said Minister Sidiki Kaba.

The first Review Conference of the Rome Statute, held in 2010 in Kampala (Uganda), adopted a set of amendments to article 8, and defined as war crimes the use of certain weapons during armed conflicts not of an international character. It also adopted a second set of amendments relating to the definition of the crime of aggression and the provisions for the exercise of the Court's jurisdiction.

The Court may exercise jurisdiction over the crime of aggression after 1 January 2017, once thirty States Parties have ratified the amendments, and subject to a decision to activate by the Assembly.

Switzerland ratified the Rome Statute on 12 October 2002. It also ratified the Agreement on Privileges and Immunities of the Court ("APIC") on 25 September 2012.