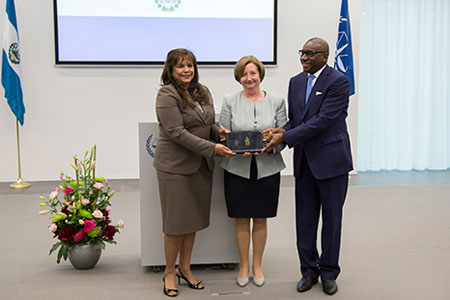 Today, 2 June 2016, the International Criminal Court (ICC) held a ceremony at the new permanent premises of the Court in The Hague (the Netherlands) to welcome El Salvador as the 124th State Party to the Rome Statute, the ICC's founding treaty.

During the ceremony, the ICC President, Judge Silvia Fernández, presented the Ambassador of El Salvador, H.E. Ms Aída Luz Santos de Escobar, with a special edition of the Rome Statute, as a symbol of their joint commitment to the rule of law.

The ceremony was held in the presence of the President of the Assembly of States Parties (ASP), H.E. Sidiki Kaba, ASP Vice-President H.E. Álvaro Moerzinger, a number of ICC Judges and representatives of the Office of the Prosecutor and Registry. The ceremony was also attended by a number of representatives of Embassies from Latin American and Caribbean countries accredited to the Netherlands.

ICC President Judge Silvia Fernández welcomed the new State Party saying: "If we wish to see the remaining States of the world join the ICC, all parts of the Rome Statute system have to remain active in offering their support and encouragement for non-States Parties that are thinking of ratification. Our system is now stronger than ever with 124 States Parties, but there is a long way to go to universality. Without universal participation, the Court cannot achieve its global mandate".

The ASP President Mr Sidiki Kaba noted that "in bringing the number of States Parties to 124, El Salvador's accession takes us closer to universality but also reminds us that we must step up our efforts to ensure that the Rome Statute family continues to grow".

The Ambassador of El Salvador,  H.E. Ms Aída Luz Santos de Escobar said: "I express the Permanent Mission of El Salvador's strong commitment to the ICC's work from today forward as a new State Party, as well as our intention to continue efforts to achieve full universality of the Rome Statute".

A video message by the Minister of Foreign Affairs of El Salvador, H.E. Mr Hugo Martinez, was also presented during the ceremony in which he said: "I take this opportunity to reiterate our thanks to all those parties guiding El Salvador in this direction. I would also like to extend the call for more states to join the International Criminal Court. Together… we will contribute towards a world where no one can endanger the integrity of our people".