The Assembly of States Parties to the Rome Statute of the International Criminal Court ("the Assembly") held its sixteenth session from 4 to 14 December 2017 at the United Nations Headquarters in New York. The Assembly was attended by States Parties, observer States, invited States, international and regional organizations and representatives from civil society. 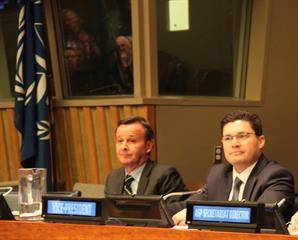 The session was opened by the outgoing President of the Assembly, H.E. Minister Sidiki Kaba (Senegal), who also presided over the election of Judge O-Gon Kwon (Republic of Korea), who will serve as President for the seventeenth to nineteenth sessions (2018-2020). The Assembly also elected Ambassador Momar Diop (Senegal) and Ambassador Michal Mlynár (Slovakia) as Vice-Presidents for the same period, based in The Hague and New York, respectively.

The Assembly elected six new judges for a term of nine years. More information on the elections is available in the press release of the Assembly dated 7 December 2017.

The Assembly proceeded with its general debate, which benefited from Ministerial-level participation, held a plenary segment to discuss cooperation which focused on the main issues regarding financial investigations discussed at the Paris Conference on 20 October 2017 and on addressing the main challenges and opportunities for effective cooperation. The Assembly also held a plenary segment to commemorate the twentieth anniversary of the Rome Statute which focused on the achievements of the Rome Statute system and, inter alia, on the key challenges that lie ahead in order to strengthen the system so it can be more effective,  efficient and truly global.

In the resolution on the activation of the jurisdiction of the Court over the crime of aggression, the Assembly recognized the historic significance of the consensual decision at the Kampala Review Conference to adopt the amendments to the Rome Statute and decided inter alia to activate the Court's jurisdiction as of 17 July 2018.

The resolution on amendments to article 8 of the Rome Statute adds three war crimes to the jurisdiction of the Court: employing microbial, biological or toxin weapons; employing weapons that injure by fragments undetectable by X-rays; and employing laser weapons.

The Assembly adopted the 2018 programme budget of the Court with appropriations totalling €147,431,500 and a staffing level of 972.

The Assembly also adopted recommendations to the judges in relation to the election of the Registrar which will take place in 2018. More information on the candidates is contained in document ICC-ASP/16/28/Rev.1.

The Assembly decided that its seventeenth session will be held from 5 to 12 December 2018, in The Hague.