During the meetings, the discussion centered on the role which the International Criminal Court plays in the system of international criminal justice, on the importance of seeking to advance universality of the Rome Statute, on the continued need for diplomatic support to the Court, as well as on the need to strengthen cooperation with the Court. 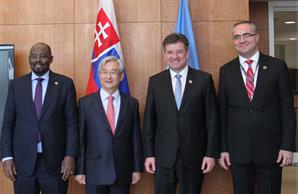 Reference was also made to the important role of the United Nations in supporting the Rome Statute system, including by facilitating the holding of sessions of the Assembly of States Parties to the Rome Statute at United Nations Headquarters, such as the sixteenth session, which had concluded on 14 December with the historic decision to activate the jurisdiction of the Court over the crime of aggression.

Furthermore, reference was also made to the commemoration of the twentieth anniversary of the adoption of the Rome Statute in 2018, which would constitute an opportune moment to reflect on the achievements attained and the challenges to overcome in the subsequent period.