The Assembly of States Parties to the Rome Statute of the International Criminal Court ("the Assembly") held its seventeenth session from 5 to 12 December 2018 at the World Forum Convention Center in The Hague. The Assembly was attended by States Parties, observer States, invited States, international and regional organizations and representatives of civil society.

The session was chaired b 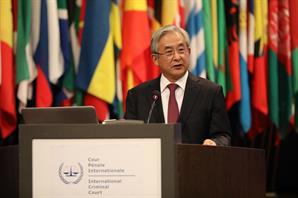 y the President of the Assembly, H.E. Mr. O-Gon Kwon. In his opening statement, President Kwon recalled that the 20th anniversary of the Rome Statute is a momentous occasion for the Assembly. He emphasized that States must move beyond making aspirational, grand-sounding statements in international fora such as this Assembly, beyond adopting resolutions and declarations, to more concrete action. He also recalled that the Court is moving forward, but will do so successfully only with the support of this Rome Statute family.

The Assembly held its general debate, which was enriched by the presence of some ministers, international organizations and representatives of civil society.

The Assembly held three thematic plenary sessions on: State cooperation, the 20th anniversary of the Rome Statute and victims' participation and legal representation.

A signing ceremony on enforcement of sentences took place on 7 December 2018 with Slovenia.

Numerous side events, including many organized by civil society, were also held during the session.