Seminar on cooperation with the ICC concludes in Benin 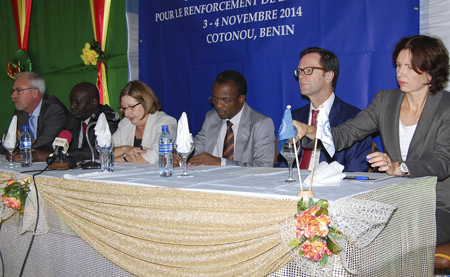 On 3 and 4 November 2014, a high level seminar for fostering cooperation between the International Criminal Court (ICC) and States Parties to the Rome Statute was held in Cotonou, Benin. Government representatives and other high level officials from seven African countries – Benin, Cameroon, Mali, Morocco, Republic of the Congo (Congo-Brazzaville), Senegal and Togo – as well as Norway and the Netherlands, ICC officials and experts, including representatives from Parliamentarians for Global Action, held in-depth discussions on cooperation between the ICC and States Parties, with an emphasis on witness protection and investigations. The seminar highlighted the importance of judicial cooperation nationally, regionally and with the International Criminal Court, and explored avenues on how the capacity of States in this regard could be strengthened.

In her keynote address to open the seminar, ICC Judge Silvia Fernández de Gurmendi stated: "Cooperation is essential for the proper functioning of the ICC. Such cooperation involves political support, as well as legal and operational cooperation. It should also be recognised that a good knowledge and proper understanding of the activities of the Court, and of the States' experiences and difficulties in their relations with the Court, are a prerequisite for cooperation". "In order to be able to assist the Court, one must know the Court and understand it", the Judge said.

Representing the seminar's host state, H.E. Valentin Djènontin-Agossou, Keeper of the Seals and Minister of Justice, Legislation and Human Rights of Benin, stated that the seminar was essential for a "better understanding of the mutual benefits of a closer collaboration between States and the ICC".

Speaking before the seminar participants, ICC Registrar Herman von Hebel highlighted that 34 African States have ratified the Rome Statute, thus constituting the largest regional group at the Assembly of States Parties, and that the majority of cases before the Court have been referred independently by the African States concerned. "The support of African States is essential to fulfilling the mandate of the court," he stressed. "In order for countries to take ownership of this Court, it would be important to make ourselves available to discuss cooperation with relevant national stakeholders and increase exchanges in order to answer legitimate questions about our functioning, procedures and mechanisms for cooperation", the Registrar said.

Speaking on behalf of ICC Prosecutor Fatou Bensouda, Mr. Amady Ba, Head of the international cooperation section in the Office of the Prosecutor, recognized "the essential and irreplacable role that the participants of this seminar can play to reinforce cooperation between the Court and States, which is indispensable to the building and the strenghening of international criminal justice, and the mandate and effectiveness of the ICC".

In all of its activities, the ICC relies on the cooperation of States and international organisations, including in the arrest and surrender of suspects, freezing and seizure of assets, enforcing sentences of imprisonment pronounced by the Court, interim release of detainees, and relocation of witnesses. The Court may enter into arrangements or agreements to provide such cooperation.

The International Criminal Court is an independent, permanent court that tries persons accused of the most serious crimes of concern to the international community as a whole, namely the crime of genocide, crimes against humanity, war crimes and the crime of aggression.