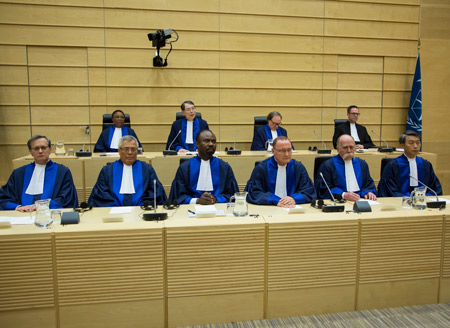 Today, 10 March 2015, six new judges of the International Criminal Court (ICC) were sworn in at a ceremony held at the seat of the Court in The Hague (Netherlands). Judges Marc Perrin de Brichambaut (France), Piotr Hofmański (Poland), Antoine Kesia-Mbe Mindua (Democratic Republic of the Congo), Bertram Schmitt (Germany), Péter Kovács (Hungary) and Chang-ho Chung (Republic of Korea) were elected for nine-year terms during the thirteenth session of the Assembly of States Parties (ASP) to the Rome Statute in December 2014.

The judges made a solemn undertaking in open court before the President of the ASP, Minister of Justice of Senegal, H.E. Mr Sidiki Kaba, stating: "I solemnly undertake that I will perform my duties and exercise my powers as a judge of the International Criminal Court honourably, faithfully, impartially and conscientiously, and that I will respect the confidentiality of investigations and prosecutions and the secrecy of deliberations".

ASP President H.E. Mr Sidiki Kaba welcomed the new judges to the Court: "It is a historic responsibility but also a great privilege. Your responsibility is to apply the law, to respect the spirit of the Rome Statute, and to work independently, thereby carrying out the functions which the States entrusted you with. But I do not doubt that you will perform your duties with independence, impartiality and  competence. »

ICC President Judge Sang-Hyun Song stated: "From tomorrow the new judges will be working together with their colleagues to reinforce the rule of law and continue to implement and develop a system of international criminal justice of which the ICC and its States Parties can be proud. In doing so, I am sure they will always remember the countless people around the world, especially the victims and vulnerable, who look to this Court with hope and expectation for a better, more just future."

Also attending the ceremony were the judges of the International Criminal Court, ICC Prosecutor Fatou Bensouda, ICC Deputy Prosecutor James Stewart, and ICC Registrar Herman von Hebel, together with a large number of diplomats and other high-ranking guests, representatives of other international organisations in The Hague and members of the civil society.