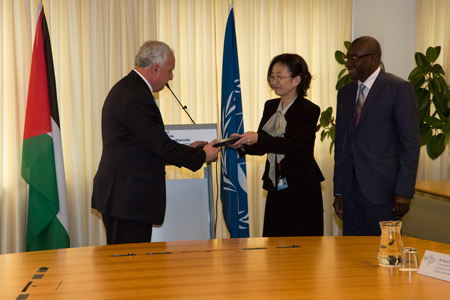 The International Criminal Court (ICC) held a ceremony on 1 April 2015 at the seat of the Court in The Hague (the Netherlands) to welcome the State of Palestine as the 123rd State Party to the Rome Statute, the ICC's founding treaty.

During the ceremony, the ICC's Second Vice-President, Judge Kuniko Ozaki, presented the Minister of Foreign Affairs of Palestine, Dr. Riad Al-Malki, with a special edition of the Rome Statute, as a symbol of their joint commitment to the rule of law.

The ceremony was held in the presence of the President of the Assembly of States Parties, H.E. Sidiki Kaba, a number of ICC Judges, ICC Deputy Prosecutor James Stewart and ICC Registrar Herman von Hebel.

Vice-President Kuniko Ozaki stated: "Accession to a treaty is, of course, just the first step. As the Rome Statute today enters into force for the State of Palestine, Palestine acquires all the rights as well as responsibilities that come with being a State Party to the Statute. These are substantive commitments, which cannot be taken lightly."

The President of the Assembly of States Parties, H.E. Sidiki Kaba, declared that "such highly symbolic commitment confirms, once again, that people all over the world embrace the noble ideals of the ICC, that are ideals of peace and justice for all."

Minister of Foreign Affairs of Palestine Dr. Riad Al-Malki said: "As Palestine formally becomes a State Party to the Rome Statute today, the world is also a step closer to ending a long era of impunity and injustice. Indeed, today brings us closer to our shared goals of justice and peace."

Speech of the President of the Assembly of States Parties H.E. Sidiki Kaba