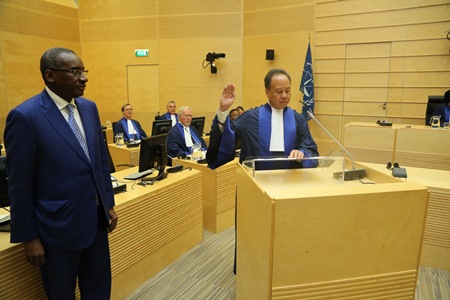 Today, 13 July 2015, the new judge of the International Criminal Court (ICC) Raul Cano Pangalangan (Philippines) was sworn in at a ceremony held at the seat of the Court in The Hague (Netherlands). He was elected on 24 June 2015 to fill a judicial vacancy during the resumed thirteenth session of the Assembly of States Parties to the Rome Statute in The Hague (Netherlands). His term of office will end on 10 March 2021.

The judge made a solemn undertaking in open court before the President of the ASP, Minister of Justice of Senegal, H.E. Mr Sidiki Kaba, stating: "I solemnly undertake that I will perform my duties and exercise my powers as a judge of the International Criminal Court honourably, faithfully, impartially and conscientiously, and that I will respect the confidentiality of investigations and prosecutions and the secrecy of deliberations".

ASP President H.E. Mr Sidiki Kaba welcomed the new judge to the Court: "[You are] joining the small and prestigious group of eminent judges who have the formidable honour and difficult responsibility of putting into practice the spirit and the letter of the Rome Statute: to deliver justice on behalf of the peoples of the world and to ensure that the most serious crimes affecting the international community as a whole do not go unpunished. […] You thus have an historic opportunity to play a part in the establishment of sound case law, the cornerstone of justice that is recognised and accepted."

ICC President Judge Silvia Fernández de Gurmendi stated: "I have no doubt that Dr Pangalangan will make an important contribution to the work of this Court. Dr Pangalangan's long history of involvement with the ICC demonstrates his commitment to international criminal justice. […] I hope this will encourage more South-East Asian states to join the ICC, and to become members of a global system to punish and help prevent the most serious crimes of concern to the international community as whole."

Also attending the ceremony were the judges of the International Criminal Court, ICC Deputy Prosecutor James Stewart, and ICC Registrar Herman von Hebel, together with a number of diplomats and other high-ranking guests, representatives of other international organisations in The Hague and members of the civil society.

Photographs of the ceremony