The President of the Assembly of States Parties visits Kenya 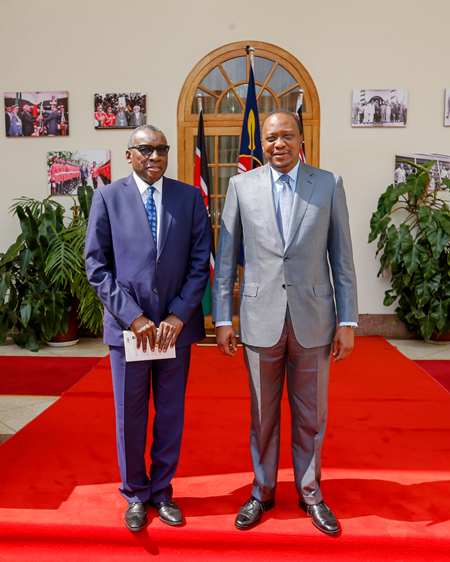 The President of the Assembly of States Parties to the Rome Statute  ("the Assembly") of the International Criminal Court ("the Court"), H.E. Mr. Sidiki Kaba, undertook, on 11 and 12 August 2015, an official visit to Kenya to meet with the country's authorities.

President Kaba held, on 11 August 2015, meetings with H.E. Dr. Amina Mohammed, Minister for Foreign Affairs and International Trade, and with H.E. Mr. Githu Muigai, Attorney General, with whom he exchanged on various issues regarding the relationship between Kenya and the Assembly of States Parties.

In addition, on 12 August, President Kaba was received by His Excellency Uhuru Kenyatta, President of the Republic of Kenya, to whom he presented his work program and reiterated the importance of the restoration of the confidence between Africa and the Court, the strengthening complementarity, cooperation with the Court, and universality of the Rome Statute.

Following this visit, which is part of a series of official trips that he undertakes in Africa, President Kaba stated:

"I thank the Government of Kenya for me inviting me and I welcome the open and frank discussions that we have had. In light of the importance of the International Criminal Court in the prevention and repression of mass crimes, I reiterate my commitment to work with all States Parties to create better conditions for dialogue within the Assembly in order to achieve the objectives of the fight against impunity, of strengthening rule of law, and of taking into account of the interests of victims."