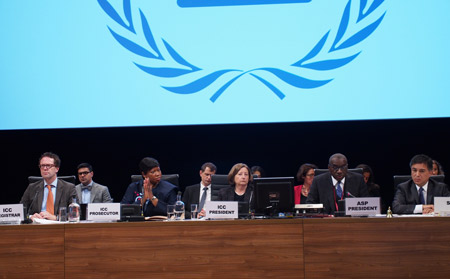 Today, 18 November 2015, the President and the Prosecutor of the International Criminal Court ("ICC" or "Court") presented the Court's annual report to the Assembly of States Parties to the Rome Statute ("ASP" or "Assembly") during the Assembly's 14th session, held in The Hague, The Netherlands.

ICC President, Judge Silvia Fernández de Gurmendi, in her remarks at the opening session stated that the Court anticipates up to four concurrent trials in 2016 involving a total of 10 accused persons.  In terms of trial proceedings, this would make 2016 the Court's busiest year to date since the Court's inception. The Court also expects pre-trial proceedings to commence in early 2016 against two new suspects, recently transferred to custody of the Court.

While recognising the continuing pressure on national budgets and the difficulties that this presents for negotiating the budget of the Court, she underlined that the Court's growing caseload cannot be ignored and the institution needs sufficient resources for its operation. President Fernández stressed that the main priority for her Presidency is to enhance the effectiveness and efficiency of the Court. She referred to the ICC Judges' "unprecedented collective efforts to expedite the criminal process by adopting best practices and revising working methods".

Judge Fernández further reported on the excellent working relationship between the ICC and the United Nations, and expressed the Court's gratitude for the support it receives. However, she stressed that challenges persist, notably the continuing lack of full cooperation or follow-up in relation to the two situations that the United Nations Security Council formally referred to the Prosecutor (Libya and Darfur, Sudan).

Finally, Judge Fernández underlined that the independence of judicial and prosecutorial functions from external influence is essential to the Court's identity and the achievement of its goals. "Without independence, the Court's whole raison d´être is compromised", she said.

The Prosecutor of the Court, Mrs Fatou Bensouda, presented an update related to her Office's activities including preliminary examinations either concluded in the past year or ongoing as detailed in her latest report.  In this context, she highlighted her recent request seeking authorisation from the Court's Pre-Trial Chamber to open an investigation into the situation in Georgia following the armed conflict of 2008.  The Prosecutor also provided an overview of major developments in the cases currently before the Court. She further stressed the importance of state cooperation as well as financial and principled political support. "Cooperation and political support also means safeguarding the Court's independent judicial functions against any threat of subverting the course of justice", she added.

Prosecutor Bensouda reminded the audience that "the ICC was created because a large number of States decided that such an institution was necessary to put an end to the most serious crimes of concern to the international community as a whole, as they endanger the peace, security and well-being of the world" and added that "the costs of delivering justice are small in comparison to the cost of conflicts and the suffering of the victims." She stressed the need for adequate resources to respond to the increase in the Court's caseload.

In her address to the Assembly, the Prosecutor concluded by reiterating that "[t]he hopes and expectations of victims of atrocity crimes must weigh heavily on our collective conscience, and compel us to stay ever committed to the cause of international criminal justice."

The ICC, governed by the Rome Statute, is the world's first permanent, treaty-based, international criminal court established to help end impunity for the perpetrators of the most serious crimes of concern to the international community, namely crimes against humanity, war crimes and genocide, and potentially, the crime of aggression in the future. In accordance with article 112 of the Rome Statute, the Assembly is the management oversight and legislative body of the ICC. It is composed of representatives of the States that have ratified and acceded to the Rome Statute. To date, the ICC benefits from the membership of 123 States Parties.

Statement by the ICC President at the opening of the 14th Session of the Assembly of States Parties to the Rome Statute of the International Criminal Court: Presentation of the Court's annual report