ICC - Crime of aggression: first ratification of the amendments 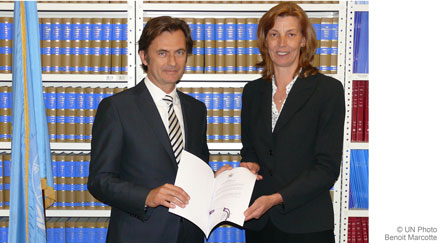 Ambassador Intelmann stated “the amendments on the crime of aggression do not merely complete the historic undertaking which started with the 1998 negotiations in Rome, they fulfil a goal pursued by humanity since the Second World War, which ended 67 years ago today. Once the amendments enter into force, individuals can again be held criminally responsible for acts of aggression by an international court as it happened in the the Nuremberg and Tokyo trials. It is particularly fitting that Liechtenstein, which played such a crucial role in the negotiation of these amendments, should be the first to ratify them. I encourage other States Parties to do the same and hope for the earliest possible entry into force of the amendments.”

President Intelmann also paid tribute to the work carried out by Ambassador Christian Wenaweser (Liechtenstein), who chaired the negotiations of these amendments in the Assembly’s Special Working Group on the Crime of Aggression (2003 to 2009) and served as the President of the Assembly from 2008-2011. In this capacity, he also presided over the Review Conference.

The crime of aggression had been included in the Rome Statute in 1998, but its definition and the conditions for the exercise of jurisdiction by the Court over the crime were left for subsequent negotiations which culminated at the Review Conference. The 2010 amendments define the crime of aggression and set out those conditions; the supplementary norms entitled “Elements of Crimes” were also updated accordingly.

The Court may exercise jurisdiction over the crime of aggression once thirty States have ratified the amendments, and subject to a decision by the Assembly.

For further information on the Assembly of States Parties, please e-mail to [email protected]