New ICC judge Geoffrey A. Henderson sworn in today at the seat of the International Criminal Court 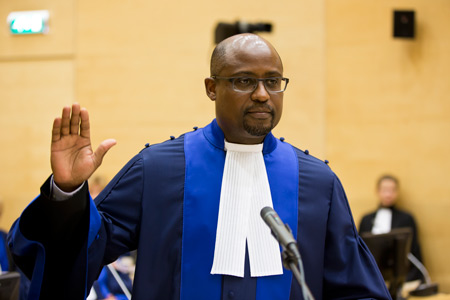 Today, 12 December 2013, the new judge of the International Criminal Court (ICC) Geoffrey A. Henderson (Trinidad and Tobago) was sworn in at a ceremony held at the seat of the Court in The Hague (Netherlands). He was elected during the twelfth session of the Assembly of States Parties to the Rome Statute (ASP) in November 2013 for a term that will run until 10 March 2021. The ICC Presidency has assigned Judge Henderson to the Trial Division. He will commence his service on a full-time basis at the Court on 1 February 2014.

Judge Henderson was elected to fill a vacancy resulting from the 18 March 2013 resignation of Judge Anthony Thomas Aquinas Carmona following his election as President of Trinidad and Tobago.

The judge made a solemn undertaking in open court before the President of the ASP, H.E. Tiina Intelmann, stating: “I solemnly undertake that I will perform my duties and exercise my powers as a judge of the International Criminal Court honourably, faithfully, impartially and conscientiously, and that I will respect the confidentiality of investigations and prosecutions and the secrecy of deliberations”.

ASP President H.E. Tiina Intelmann welcomed the arrival of the new judge to the Court. “I welcome you to the bench of the Court and I know that you will earnestly assume your role and meet the challenges that may arise”, she said.

ICC President Judge Sang-Hyun Song stated: “The Court’s eighteen judges reflect the extraordinary diversity of the States Parties to the Rome Statute. They come from all the major regions of the world, embodying a rich variety of cultures, languages and legal traditions. Judge Henderson fits perfectly into this group as a highly qualified individual with extensive experience in the field of criminal law as Director of Public Prosecutions before the High Court of Trinidad and Tobago from 2002 to 2008 and subsequently as a High Court Judge of the Supreme Court of Trinidad and Tobago since 2009”.

Also attending the ceremony were the judges of the International Criminal Court, Deputy Prosecutor James Stewart, and ICC Registrar Herman von Hebel, together with a large number of diplomats and other high-ranking guests, representatives of other international organisations in The Hague and members of the civil society.

Statement of the President of the ASP, H.E. Tiina Intelmann
English | Français

Photographs of the ceremony