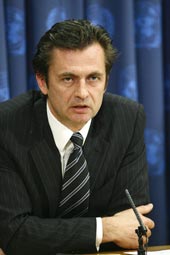 The second resumption of the seventh session of the Assembly of States Parties to the Rome Statute of the International Criminal Court (“the Assembly”) was held from 9 to 13 February 2009 at United Nations Headquarters in New York.

At the second resumption, the Special Working Group on the Crime of Aggression, which has been chaired since 2003 by H.E. Mr. Christian Wenaweser, Permanent Representative of Liechtenstein to the United Nations, who is also the President of the Assembly for the period 2008-2011, concluded its discussions on, inter alia, the definition of the crime of aggression and the conditions for the exercise of jurisdiction by the Court over this crime.

The draft provisions on the crime of aggression under consideration include a definition of the act of aggression, which is based on United Nations General Assembly resolution 3314 (XXIX), with a threshold, an open-ended lists of acts that would qualify as an act of aggression and wording on the requisite leadership element to establish individual criminal responsibility for the act.

There are divergent views regarding a possible role for the United Nations Security Council prior to the initiation of an investigation by the Prosecutor. Some delegations consider the Prosecutor may only proceed with an investigation in respect of a crime of aggression if the Security Council has previously made a determination that an act of aggression has been committed by a State.

Other options under consideration foresee that in the absence of such a determination by the Security Council the Prosecutor may only proceed with an investigation if:

Furthermore, some delegations posit that the absence of a determination of an act of aggression by the Security Council should not prevent the Prosecutor from proceeding with an investigation.

Additional work on the crime of aggression will be undertaken at an informal intersessional meeting tentatively scheduled for 8 to 10 June 2009 and at the eighth session of the Assembly in November in order to further refine the proposals on the crime of aggression which would be submitted for consideration by the Review Conference, scheduled to take place in Kampala, Uganda, in the first semester of 2010.

At the second resumption of its seventh session the Assembly also held informal consultations on the scope of the Review Conference and on the establishment of an independent oversight mechanism for the Court, foreseen in article 112, paragraph 4, of the Statute.

Documentation for the session is available on the website of the Court, here.


For further information on the second resumption of the seventh session of the Assembly of States Parties, please contact Ms. Gabrijela Filipovi, at +31 646 448 793 or [email protected]

* Translation by the Secretariat of the Assembly of States Parties