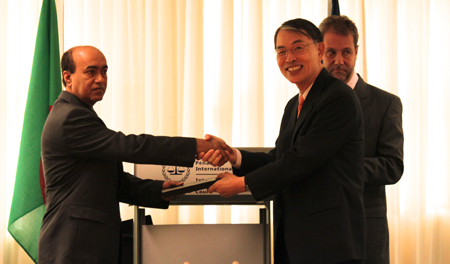 Today, the International Criminal Court (ICC) held a ceremony at the seat of the Court to welcome the People’s Republic of Bangladesh as a new State Party to the Rome Statute.

During the ceremony, the President of the Court, Judge Sang-Hyun Song, presented the Ambassador of Bangladesh, H.E. Mr Muhammad Ali Sorcar, with a special, limited edition of the Rome Statute, as a symbol of welcoming Bangladesh into the community of States Parties.

ICC President Song recognized Bangladesh’s commitment to peace, justice and the rule of law, stating: “By ratifying the Rome Statute, Bangladesh has joined the growing number of the world’s nations that have combined forces to end impunity for the most serious crimes of concern to humanity”.

The Vice-President of the Assembly of States Parties (ASP) and Ambassador of Mexico, H.E. Mr Jorge Lomónaco, highlighted that as a result of this ratification, “156 million more persons are now protected by the legal regime of the Rome Statute system”. Bangladesh’s decision is also a call to other countries to join efforts “in the fight for global justice”, said the ASP Vice-President.

In response, Ambassador Sorcar reiterated Bangladesh’s commitment “to the pursuit of a tolerant, peaceful and just world where people from all color and creed live in harmony and dignity”.

The ceremony was held in the presence of several other high-ranking Court officials, including Judge Erkki Kourula, Judge Daniel Nsereko, Judge Christine Van den Wyngaert, and Judge Tarfusser, as well as the Deputy Registrar, Mr Didier Preira and Ms Shamila Batohi on behalf of the Office of the Prosecutor.

Speech of the President of the ICC, Judge Sang-Hyun Song

Speech of the Vice-President of the Assembly of States Parties, the Ambassador of Mexico, H.E. Mr Jorge Lomónaco

Video footage of the event is available on YouTube, here.