ICC - President of the Assembly of States Parties visits The Hague 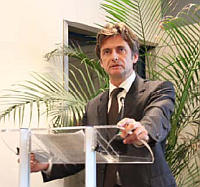 Criminal Court (“the Assembly”), Ambassador Christian Wenaweser, visited The Hague from 11 to 14 October 2010 where he held an informal meeting with seventeen of the judges of the Court. President Wenaweser, accompanied by the Vice-President of the Assembly, Ambassador Jorge Lomónaco, also held a retreat with the President of the Court, the Prosecutor and the Registrar, to discuss governance issues. President Wenaweser discussed ICC matters with other senior officials of the Court and members of the diplomatic community, briefed The Hague based ICC Group of Friends on the preparations for the ninth session of the Assembly, and met a group of parliamentarians from the Democratic Republic of the Congo, as well as a group of journalists from Kenya. Furthermore, he delivered a lecture at the Asser Instituut on his reflections on the Kampala Review Conference.

President Wenaweser also welcomed the 12 October ratification of the Rome Statute by the Republic of Moldova as a sign of the growing support for the International Criminal Court.

For further information on the Assembly of States Parties, please e-mail to [email protected].