ICC - Review Conference of the Rome Statute opened in Kampala 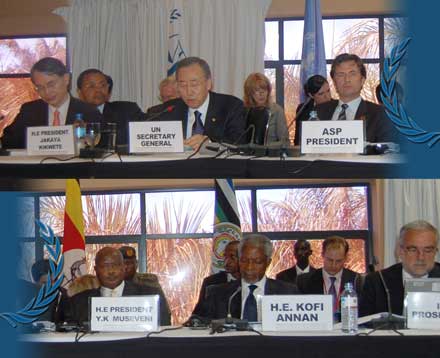 The Review Conference of the Rome Statute of the International Criminal Court (ICC) opened in Kampala, Uganda. Opening remarks were delivered by the President of the Assembly of States Parties, Ambassador Christian Wenaweser, the United Nations Secretary-General, Ban Ki-moon and the ICC President Judge Sang-Hyun Song. Statements were also made by the ICC Prosecutor, Luis Moreno-Ocampo, the former United Nations Secretary-General, Kofi Annan and the President of Uganda, Yoweri Kaguta Museveni.


The Conference represents the first opportunity to consider amendments to the Rome Statute – the ICC’s founding treaty - and to take stock of its implementation and impact since it entered into force in 2002. 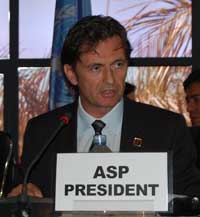 In his opening statement the President of the Assembly, Ambassador Christian Wenaweser, highlighted that today the ICC is a functioning judicial institution and that “there is no need for significant changes” to the Rome Statute. He added that the States have to “continue to strive for universality in the membership of the Court”. Furthermore, regarding the central topic in the review of the Statute, the crime of aggression, Ambassador Wenaweser stated that “the large task ahead of us consists of finding a solution, with the willingness to compromise from all of you, that assembles the largest possible political support”. He appealed to the States to approach “the discussions with an open mind”. 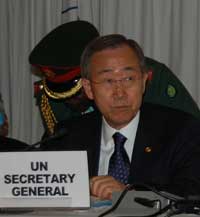 For the United Nations Secretary-General, Ban Ki-moon, the Kampala Review Conference is an important opportunity, not only to take stock of the progress of the Court, but also to strengthen the collective determination that international crimes cannot go unpunished. He underlined that “the era of impunity is over. We are witnessing the birth of a new age of accountability”.


The ICC President Judge Sang-Hyun Song stressed that “without cooperation, there will be no arrests, victims and witnesses will not be protected, and proceedings will not be possible”. The ICC President stated that “without credible and fair domestic proceedings the impunity gap will grow large”. He hopes that this Conference “will serve not only to refresh and renew the spirit of Rome but also to chart a path for the future”.


The former UN Secretary-General, Kofi Annan, Kofi Annan noted that even though the African Union had called upon its member States not to co-operate with the ICC, “it is not ‘Africa’ that is hostile to the Court” and further indicated that when he meets Africans from all walks of life “they demand justice: from their own courts if possible, from international courts if no credible alternative exists” and that as an African he was proud of the continent’s contribution to the ICC, exemplified by the fact that 30 countries in sub-Saharan Africa were parties to the Rome Statute. He stated that Africa wants, needs and should continue to support the ICC.


The Conference that will last until 11 June offers an exceptional occasion for governments to help advance the global fight against impunity and to reinvigorate the system of international criminal justice.


Further information about the Review Conference can be found on the website of the International Criminal Court at:
https://asp.icc-cpi.int/en_menus/asp/reviewconference/.