The President of the International Criminal Court (ICC), Judge Sang-Hyun Song, and the Prosecutor Luis Moreno-Ocampo delivered statements today in a panel discussion on complementarity during the Review Conference that it is taking place in Kampala, Uganda. Judge Song participated also as key note speaker in the discussions on States co-operation with the ICC.

During the first panel, moderated by Professor William A. Schabas, discussions focussed on the practical application of the principle of complementarity in the Rome Statute as well as possible activities and actions that States can undertake in order to strengthen and enable other States’ capabilities to conduct investigations and trials of international crimes, including the concept of “positive complementarity”.

Judge Song stated that “the domestication of ICC crimes in national codes offers a first measure of States’ commitment to the principle of complementarity. With regard to the importance of developing national capacities, this is primarily the responsibility of States. The Court has at most, a limited role as a catalyst or facilitator of information sharing”.

President Song acknowledged the work already done by international organizations, States and NGOs on many aspects of fulfilling the promise of complementarity, in particular providing expertise, trainings and material resources. “However, more can be done to better bring together and coordinate different activities, to raise awareness of opportunities, and to mainstream international criminal law throughout existing rule of law programmes” he added. These vitally important tasks are for States but the ICC will give them “fully support within the limits of its narrow mandate”, Judge Song said.

ICC Prosecutor Luis Moreno-Ocampo highlighted that “Positive complementarity is about States assisting one another, receiving additional support from the international Criminal Court itself as well as from civil society to meet Rome Statute obligations”. 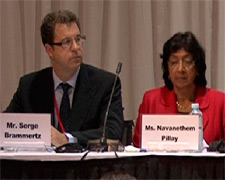 During the second panel of the day moderated by Philippe Kirsch, former President of the International Criminal Court and ad hoc Judge at the International Court of Justice, discussions focused on the States Parties’ experiences in relation to co-operation, including challenges and good practices, implementing legislation, agreements, arrangements and other forms of co-operation and assistance to the Court’s activities. Co-operation with the United Nations and other intergovernmental bodies and enhancing knowledge, awareness and support for the Court were also discussed.

The ICC President recalled the importance of States Parties to cooperate with the Court. “I am not suggesting that States as necessarily unwilling to cooperate. States have many priorities. Cooperation with the Court may be low on the list of priorities on it may be even in tension with some other priorities. However, cooperation is a legal obligation. And cooperation is most important precisely when circumstances are most difficult” he said. He also stressed that the Court lacks the means to enforce co-operation. “The only formal possibility for the Court to deal with non-cooperation is to refer an instance of it to the Assembly or Security Council (…). Once the Court issues an arrest warrant or request for co-operation, States and the Assembly (of the States Parties) must then take the lead. It is my hope that the Assembly will consider as a matter of priority how they can best use the political and diplomatic tools at their disposal to bring about cooperation” Judge Song added.

Both events were part of the stocktaking exercise during which the overall success and impact of the Rome Statute is being considered. Other topics included the Impact of the Rome Statute system on victims and affected communities and Peace and Justice. Next Tuesday 8 June, outcome documents on the stocktaking event will be adopted. The Review conference will be closed on 11 June.


ICC President’ speech during the panel on complementarity: video

ICC President’ speech during the panel on co-operation: video

ICC Prosecutor’s speech during the panel on complementarity: video