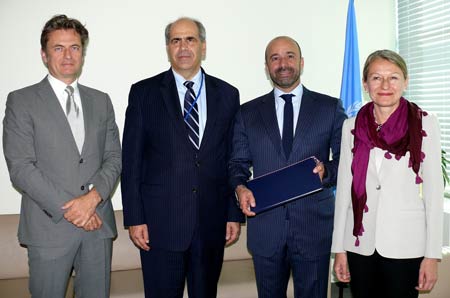 The President of the Assembly of States Parties to the Rome Statute, Ambassador Tiina Intelmann, observed and warmly welcomed the deposit at the United Nations on 28 April 2014 of the instruments of acceptance of the 2010 amendments to the Rome Statute, by H.E. Mr. Peter Burian, State Secretary of the Ministry of Foreign and European Affairs of the Slovak Republic.

The 2010 Amendments to the Rome Statute are two sets of amendments that were adopted by consensus at the first Review Conference of the Rome Statute, held in Kampala, Uganda. The first of these amendments pertains to article 8 of the Rome Statute, which characterizes the use of certain weapons during non-international armed conflict as war crimes. The second concerns the provisions for the exercise of jurisdiction of the Court over the crime of aggression.

"The deposit of instruments of acceptance by Slovakia brings the number of States that have ratified both amendments to fourteen. The Kampala Amendments, especially on the crime of aggression, strengthen the international legal framework that prohibits the use of force and increases the guarantees of peace and of respect for the territorial integrity of the States Parties to the Rome Statute. I hope that other States Parties from all regions will follow suit," stated President Intelmann.

Slovakia ratified the Rome Statute on 11 April 2002, making it one of the first sixty States to contribute to the entry into force of the Statute, thereby establishing the ICC. Slovakia also ratified the Agreement on Privileges and Immunities of the Court on 26 May 2004. Slovakia has also completed the process of domestic implementation of the Rome Statute through the incorporation of the crimes and general principles contained in the Rome Statute, and of the necessary provisions to ensure effective cooperation with the International Criminal Court.