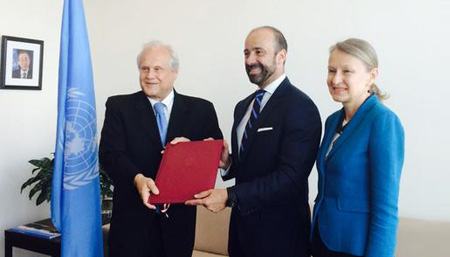 "The deposit of instruments of ratification by Austria brings the number of ratifications of the crime of aggression to fifteen," stated President Intelmann. "The Kampala Amendments, especially on the crime of aggression, strengthen the international legal framework that prohibits the use of force and increases the guarantees of peace and of respect for the territorial integrity of the States Parties to the Rome Statute. Thus it is encouraging that the pace of ratifications continues. I hope that other States Parties from all regions will follow suit."

Austrian Ambassador Sajdik remarked that, "The fight against impunity for grave violations of human rights and the strengthening of the International Criminal Court is a top priority of Austrian foreign policy. Austria is proud that by ratifying the amendments, it is not only supporting the International Criminal Court in the fight against impunity but also contributing considerably to the development of international criminal justice."

Austria ratified the Rome Statute on 28 December 2000, making it one of the first sixty States to contribute to the entry into force of the Statute, thereby establishing the Court. Austria also ratified the Agreement on Privileges and Immunities of the Court on 17 December 2003, and in 2002 it enacted legislation to ensure effective cooperation with the Court. Austria was also the first state party to conclude, in 2005, an Agreement on the enforcement of sentences with the Court.