The Assembly of States Parties to the Rome Statute of the International Criminal Court ("the Assembly") held its thirteenth session from 8 to 17 December 2014, at the United Nations Headquarters in New York. The Assembly was attended by States Parties, observer States, invited States, international and regional organizations and representatives from civil society. 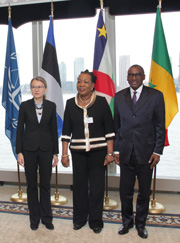 The meeting was opened by the outgoing President of the Assembly, Ambassador Tiina Intelmann (Estonia), who also chaired the election of the Minister of Justice of Senegal, H.E. Mr. Sidiki Kaba, as President for the thirteenth to sixteenth sessions (2014-2017). The Assembly also elected, for the same period, Ambassador Alvaro Moerzinger (Uruguay) and Ambassador Sebastiano Cardi (Italy) as Vice-Presidents, Ms. Barbara Kremzar (Slovenia) as Rapporteur and the following other members of the Bureau: Chile, Colombia, Costa Rica, Czech Republic, Ghana, Germany, Hungary, Japan, the Netherlands, Nigeria, Republic of Korea, Romania, Samoa, South Africa, Sweden, Uganda, United Kingdom of Great Britain and Northern Ireland.

In his address, President Kaba expressed his gratitude to the President of the Republic of Senegal, H.E. Mr. Macky Sall, for introducing and promoting his candidature, conveyed his appreciation of the endorsement from the African States Parties and thanked the Assembly for entrusting him with this important position.

Minister Kaba also paid tribute to the work of Ambassador Intelmann, his predecessor, with whom he attended a meeting with the United Nations Secretary-General, Mr. Ban Ki-Moon, on 5 December 2014. 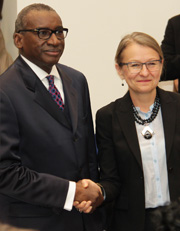 H.E. Mr. Kaba indicated that the priorities for the triennium of his Presidency would be: reconciling the Court with all regions of the world, including Africa; developing cooperation between the Court and States; strengthening complementarity; and working towards achieving universality of the Rome Statute. In order to meet these challenges, President Kaba called for the support and commitment of all stakeholders, from States to international organizations, from organs of the Court to civil society organizations.

He stressed that "justice can be a powerful vector of peace endowed with the pedagogic virtue to extinguish the flame of violence and to lighten that of hope" and concluded his statement by reassuring the audience that he would be "devoted to this exciting and challenging mission".

The Assembly was further addressed by a keynote speaker, the President of the Central African Republic, H.E. Mrs. Catherine Samba-Panza, as well as other high level speakers including the Minister of Foreign Affairs of Senegal, H.E. Mr. Mankeur Ndiaye, who spoke on behalf of the President of the Republic Senegal, H.E. Mr. Macky Sall, and the United Nations Under-Secretary-General for Legal Affairs, Mr. Miguel de Serpa Soares, who spoke in representation of the United Nations Secretary-General.

The President of the Court, Judge Sang-Hyun Song, the Prosecutor, Ms. Fatou Bensouda and the Chair of the Board of Directors of the Trust Fund for Victims, Mr. Motoo Noguchi, also delivered their annual reports to the Assembly.

Furthermore, the Assembly elected six members of the Committee on Budget and Finance for three years and filled a vacancy, which had arisen due to resignation of a member.

During the second plenary meeting, the Assembly elected six new judges for a term of nine years:

SCHMITT, Bertram
Group of Western European and other States (Germany), list A, male


The Assembly proceeded with its general debate which benefited from Ministerial-level participation and held a plenary segment to discuss cooperation which focused on two topics: "Cooperation in the field of Sexual and Gender Based Crimes" and on cooperation in general. Several side events, including some organized by civil society were also held during the session.

The Assembly adopted five resolutions by consensus: on the 2015 budget of the Court, on the permanent premises, on cooperation, on victims and affected communities and the "omnibus" resolution.

The Assembly adopted the 2015 program budget of the Court with appropriations totalling €130,67 million.

The Assembly decided to mandate the Bureau to consider the practicalities of holding a resumed thirteenth session in the second quarter of 2015 to fill a judicial vacancy. The fourteenth session of the Assembly will be held from 18 to 26 November 2015 in The Hague.