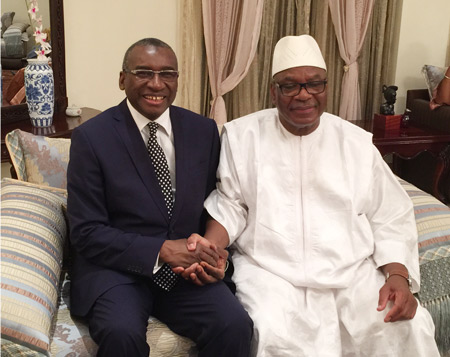 In the framework of his activities to promote the cooperation of States with the International Criminal Court, the President of the Assembly of States Parties to the Rome Statute ("the Assembly") of the International Criminal Court ("the Court"), H.E. Mr. Sidiki Kaba travelled to Bamako, on 21 May 2015, to meet with H.E. Mr. Ibrahim Boubacar Keïta, President of the Republic of Mali.

At the outset of their meeting, President Sidiki Kaba welcomed the excellent cooperation of the Government of Mali with the Court and its engagement with the Assembly.

The two authorities then discussed the challenges faced by the Court to effectively fight against the impunity of those responsible for the most serious crimes under international law.

The Head of State of Mali and the President of the Assembly recalled the primary obligation that States have to judge, at the national level, genocide, crimes against humanity and war crimes. In this regard, President Sidiki Kaba encouraged Mali to continue the reforms to strengthen its judicial system, and to consider the adoption of national legislation on cooperation with the Court.

In relation to his visit, President Sidiki Kaba stated: "I am extremely grateful to the President of the Republic of Mali, H.E. Mr. Ibrahim Boubacar Keïta, for his hospitality and for his personal commitment in ensuring Mali's contribution to the strengthening of the Rome Statute system and the International Criminal Court. I leave Bamako reassured that the Court and the Assembly have in Mali a strong partner in the fight against impunity."

The Republic of Mali became, on 16 August 2000, the 16th State Party to the Rome Statute. In August 2001, Mali adopted legislation incorporating the crimes contained in the Rome Statute. On 13 January 2012, it concluded with the International Criminal Court an agreement on enforcement of sentences. On 18 July 2012, the Government of Mali referred to the Prosecutor the situation in its territory since January 2012. Having determined that there is a reasonable basis to believe that crimes under the jurisdiction of the Court have been committed in Mali, on 16 January 2013, the Prosecutor opened an investigation.