On 3 and 4 September 2015, the President of the Assembly of States Parties to the Rome Statute ("the Assembly") of the International Criminal Court ("the Court"), H.E. Mr. Sidiki Kaba, traveled to Conakry where he was received by H.E. Mr. Alpha Condé, President of the Republic of Guinea.

During their meeting, President Kaba welcomed the excellent cooperation between the Guinean authorities and the Court. He also encouraged Guinea to adopt national legislation on cooperation with the Court and on the implementation of crimes under the Rome Statute, while emphasizing the necessity to broaden and accelerate the investigations into the crimes perpetrated in the country on 28 September 2009.

President Kaba and H.E. Mr. Condé also discussed broadly the relations between Africa and the Court, as well as the challenges to complementarity. On these two points they agreed on the need to improve dialogue between the two parties in order better fight impunity, and on the importance of reinforcing national jurisdictions to enable States to duly fulfill their primary obligation to investigate and prosecute at the national levels, in a fair and impartial manner, those responsible for crimes of genocide, crimes against humanity and war crimes. 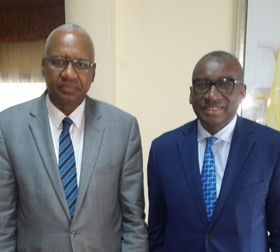 During his stay in Guinea, President Kaba also met with H.E. Mr. Cheick Sako, Minister of Justice, with Mr. Mondjour Cherif, Attorney General to the Appeals Court of Conakry, with the bench of investigative judges of proceedings related to the events of 28 September 2009, with the Victims' Association AVIPA, as well as with civil society organizations including the Guinean Organization for Human Rights, the International Federation for Human Rights (FIDH), and the Lawyer's Collective.

President Kaba with Mr. Mondjour Cherif, Attorney General to the Appeals Court of Conakry and with the bench of investigative judges of proceedings

Upon conclusion of his visit, President Kaba stated:
"I salute the personal commitment of President Condé to ensure the full cooperation of Guinea with the Court, as well as its active participation within the Assembly of States Parties. Consequently, Guinea will continue being a key partner in the pursuit of our shared aspiration to guarantee justice to the victims of the most serious crimes". 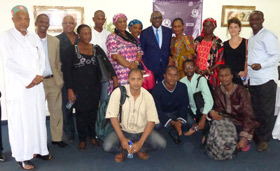 President of the Assembly with members from the Victims’ Association AVIPA, the OGDH, FIDH and the Lawyer’s collective

The visit of President Kaba to Guinea is part of his work travels in Africa undertaken to strengthen the relations between the continent and the International Criminal Court and to foster engagement of African States Parties in the activities of the Assembly.

On 14 July 2003, the Republic of Guinea became the 90th State party to the Rome Statute. On 14 October 2009, on the basis of several communications under article 15 of the Rome Statute, and in relation to the events that occurred on 28 September 2009, the Office of the Prosecutor announced the preliminary examination of the situation in Guinea.