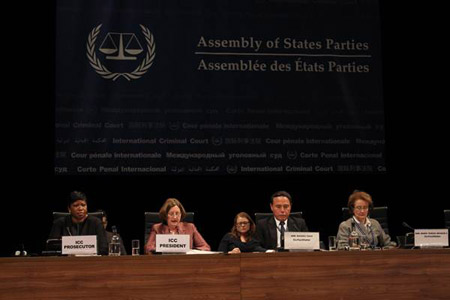 On 24 November 2015, the President of the International Criminal Court ("ICC" or the "Court"), Judge Silvia Fernández de Gurmendi, and the ICC Prosecutor Fatou Bensouda addressed a special plenary session at the Assembly of States Parties ("ASP" or the "Assembly") held in The Hague on the topic of increasing the efficiency and efficacy of court proceedings and operations, and discussed the significant progress made by the Court in this area.

President Fernández underlined that a key aspect of the Court's sustainability is the quality of justice that the Court is able to dispense. "It is essential that the Court addresses the perception that our proceedings are too lengthy and not as efficient and effective as they should be", she said.

She detailed the progress made by the Court's Judges in the framework of the Working Group on Lessons Learnt, emphasising that the judges have adopted a holistic approach to increasing efficiency by pursuing measures which can impact proceedings as a whole, such as identifying best practices and pursuing greater harmonisation across Chambers and Divisions. As an example, the President mentioned the Pre-Trial Practice Manual published earlier this year, which is a living document codifying best practices and providing a framework for parties appearing before the Court. She also highlighted the Judges' efforts in working towards a uniform system for processing and assessing victims' applications for participation.

President Fernández outlined a number of amendment proposals to relevant legal texts of the Court, which are at various stages of discussion by the judges. Finally, she informed the Assembly of States Parties that during 2015 the Court has worked toward the adoption of a methodological approach to the development of indicators to assess the performance of the ICC. She assured the representatives of the States that "enhancing the Court's efficiency and effectiveness remains [her] top priority".

Prosecutor Bensouda noted that increasing efficiency and effectiveness, as well as consistent quality output, are key priorities, and entrenched as objectives in her Office's new Strategic Plans.  She informed the Assembly that the new approaches outlined in her Strategic Plans, as implemented in practice, have already shown positive results.    Such changes, she stressed, "promise greater speed and efficiency in the eventual proceedings before the Court, since well-founded cases that are cogently presented help the Chambers to conduct proceedings that are efficient and fair."  She further discussed the efforts of her Office in identifying 14 organ-specific performance indicators, which will be measured in 2016.  These carefully defined indicators relate to prosecutorial results and operational excellence covering the Office of the Prosecutor's core activities from preliminary examinations and investigations to prosecutions.

The Prosecutor invited the States Parties to provide the Court with the resources and support required in order to optimise achievements made so far. "Ultimately efforts to make the Court more effective and efficient must be aimed at adequately responding to the ever-growing need for accountability for atrocity crimes, and  bring timely and meaningful redress to victims and affected communities in accordance with the Rome Statute", she said.