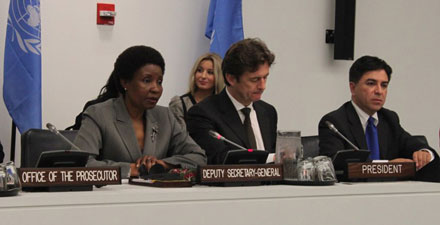 The resumed eighth session of the Assembly of States Parties to the Rome Statute of the International Criminal Court (“the Assembly”) was held from 22 to 25 March 2010 at United Nations Headquarters in New York.

At the resumed eighth session, the Assembly continued its discussions on the crime of aggression, in particular by addressing two issues: firstly, whether an alleged aggressor State would have to accept the jurisdiction of the Court over the crime and secondly whether the United Nations Security Council would have to determine the existence of an act of aggression before the Court could exercise its jurisdiction and the possible judicial filters that could be applied in the absence of such a determination by the Council, prior to the Court pursuing the matter further.

The Assembly adopted a resolution on the Review Conference, which shall be held in Kampala from 31 May to 11 June 2010 that foresees the organization of the panels at the Conference on the following topics under the stocktaking exercise:

a) The impact of the Rome Statute system on victims and affected communities;

b) Peace and justice;

The Assembly also adopted a resolution extending the deadline for States interested in making one time payments for the permanent premises of the Court.

Furthermore, a draft resolution on strengthening the enforcement of sentences was forwarded for consideration by the Conference.

The Bureau of the Assembly will also be preparing a high level ministerial declaration, as well as preparing for States Parties and observers to make pledges on a wide range of matters which include, inter alia, pledges to ratify the Rome Statute or the Agreement on the Privileges and Immunities of the ICC, adopt implementing legislation, provide cooperation to the Court via enforcement of sentences agreements, assistance with the protection of witnesses, contributions to the Trust Fund for victims, etc.

In addition, two draft resolutions, one on the impact of the Rome Statute system on victims and affected communities, and another on complementarity, were also prepared for consideration by the Conference.

In light of the 23 March deposit by Bangladesh of its instrument of ratification of the Rome Statute, the total number of States Parties as of 1 June 2010 will be 111. Bangladesh is the first South-Asian State to become a party to the Statute.

Documentation on the resumed eighth session, as well as on the Review Conference is available at http://www.icc-cpi.int, under Assembly of States Parties.

For further information on the resumed eighth session of the Assembly of States Parties, please send an email to [email protected].