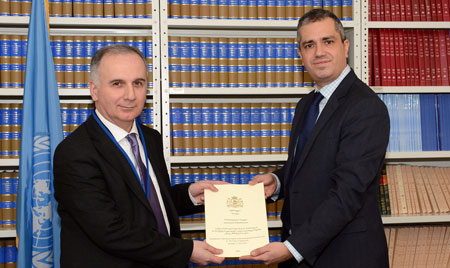 The President of the Assembly of States Parties to the Rome Statute, Ambassador Tiina Intelmann, welcome the deposit on 5 December 2014 of the instrument of ratification of Georgia of the 2010 amendments to the Rome Statute on the crime of aggression by H.E. Mr. Gocha Lordkipanidze, Deputy Minister of Justice of Georgia. The deposit of the instrument of ratification by Georgia brings the number of ratifications of the amendments on the crime of aggression to twenty. Georgia is the seventh country from the Eastern European Group to have ratified this set of amendments.

"It is noteworthy that most of the countries that have ratified the Kampala Amendments on the crime of aggression come from the European region. It reveals their appreciation of the relevance of the amendments on the crime of aggression against the realities and challenges of today," President Intelmann stated. "I am hopeful that other States Parties from all regions will express equal determination to proceed with the ratification of the  amendments adopted at the Kampala Review Conference.  On the eve of the thirteenth session of the Assembly it is important to focus at strengthening the International Criminal Court, including by giving the Court supremely qualified judges."

Georgia ratified the Rome Statute on 5 September 2003. In August 2003, it adopted legislation incorporating the Rome Statute crimes and provisions on cooperation, respectively, into domestic law. On 10 March 2010, it ratified the Agreement on Privileges and Immunities of the Court (APIC).